Hot Springs, Arkansas – National Park College (NPC) announced the three finalists for mascot this week in conjunction with Spirit Week activities. The final three mascot concepts were selected from the top 10 by members of the Student Government Association and administration. Scenesbydean.com concept boards artists are good in conceptual point of view by transforming words and ideas.

Graphic artist, Cari Elliott prepared concept boards for the audience using references from other school mascots. She explained how each idea could be represented graphically.

The three finalists include: 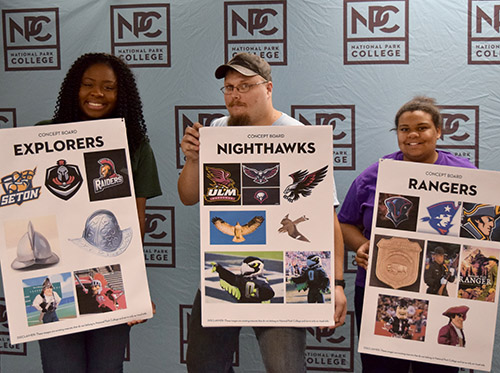 Explorers – Elliott said, “Our explorer isn’t wearing a safari hat but a full suit of armor like the Spanish explorers that traveled through Arkansas in the 1500s. The Explorer illustration would bear an NPC flag and sit nicely within a shield emblem. The costume would have its face covered completely by the Spanish helmet and may be in a full or partial suit of armor. This mascot would be depicted in our colors of NPC gray over the body and armor with accents of our blue throughout.”

Rangers – “Because there isn’t another Park Ranger mascot in existence, we grabbed some imagery of the Patriots logo illustrations and costumed mascot for reference. For the logo illustration, the iconic badge of a park ranger could be used like a shield emblem. The hat would come forward over the face slightly, casting a mysterious dark shadow over the intimidating ranger. The costumed mascot would be mostly our gray with accents of NPC blue and have a face similar to those pictured in our concept board,” Elliott said.

Nighthawks – Elliott shared, “Nighthawks are actual birds that live in Arkansas. They have sharp, angular wings, a bright stripe of white near the wingtips, and a notched tail, appearances that lend itself to a sleek, modern mascot. We’ll take these traits and combine them with a full sized hawk to create the look of an imposing foe. Our nighthawk mascot would be mostly gray with accents of NPC blue. The fierce logo illustrations, like those we have included in our concept board, would be highly versatile with the ability to be drawn and redrawn at multiple angles and styles. Additionally, the nighthawks are known for their buzzy, ‘peent’ call, which could be developed into a call for the NPC Nighthawks.”

Dean of Enrollment, Jason Hudnell said, “We are very excited about the three finalists and can’t wait to see what the students choose. The response from the community has been phenomenal and we greatly appreciate all of the suggestions. I really believe that out of these three ideas we will have one that NPC and Garland County can really get behind.”

Voting will be open to the campus September 23-30. The new mascot will be revealed at a pep rally October 26.